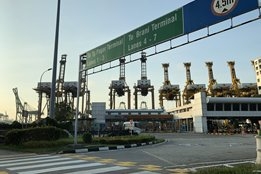 The firm no longer appears on the MPA's list of accredited bunker suppliers effective May 7th.

The Mabanaft subsidiary was ranked as Singapore's 23rd largest supplier by volume for 2018.

The exit follows that of fellow Mabanaft entity Bomin, which departed the world's biggest bunker market at the end of last year.

At the time the firm was forced to defend rumours it was exiting the marine fuel business altogether, after an internal email surfaced stating that "bunkering does not fit into parent Mabanaft's business model".

Matrix Marine's exit means there are now 49 licence suppliers in Singapore, having fallen to 50 only last month with the exit of The Barrel Oil Pte Ltd, and there is speculation this number could fall again with two of the current suppliers in particular facing commercial headwinds.

The entire bunker tanker fleet of supplier Brightoil Petroleum (Singapore) Pte Ltd remains under arrest since last November when the company was hit with a winding up order.